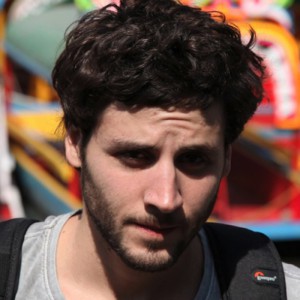 Juan Renau was born in Buenos Aires in 1986. He graduated from the University of Buenos Aires with a degree in Filmmaking. He works as a documentary director and cinematographer.

His first short YO Y MARU 2012 (2013) won the short film competition at BAFICI 2013. His second short film LAS LUCES (co-directed with Manuel Abramovich) has been screened at Abu Dhabi Film Festival, Tribeca, and Fribourg. INCENDIO/RESCATE (2015), short documentary, was premiere at Visions du Réel. THE HEAVEN OF ANIMALS (2017) received the support from Fondo Nacional de las Artes and Fondo Metropolitano; premiered at Bafici 2017 and screened in other festivals like IndieLisboa or MiradasDoc. And LIONEL (world premiere at Visions du Réel in 2018). He is currently working on his first feature-length documentary.