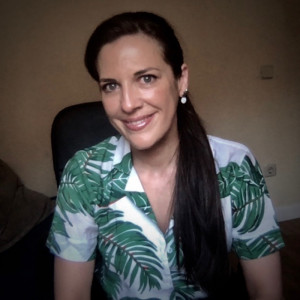 Nayra Sanz Fuentes is a film director, scriptwriter, editor and producer who graduated with a degree in Spanish Philology, majoring in contemporary literature. She went on to take a Master
in Advanced Studies at the Humboldt University of Berlin thanks to a scholarship from DAAD, the German Academic Exchange Service. Her field of study focused on the national-socialist body through the work of the filmmaker Leni Riefenstahl. Afterwards, she took a Master in Film Directing in New York, where she lived for two years and started to work on film productions.

On returning to Spain she set up a production company called Rinoceronte Films, whose mission is to produce films and develop cultural projects. At the moment, her filmography contains seven fiction and non-fiction shorts: SELFIE (2019), IN THOSE LANDS (2018), SUB TERRAE (2017), JUST ANOTHER DAY (2014), THINGS IN COMMON (2011), ENCOUNTER (2010), and ANNIVERSARY (2009). Overall, they have been screened at more than 200 lm festivals worldwide and have won several awards including the Caracola Alcances prize at the Cadiz Documentary Film Festival, the Edward Snowden prize, and the Miradas Doc Award, among others.

Her first feature-length film, AS OLD AS THE WORDL (2012), won the Círculo Precolombino de Oro at the 29th International Film Festival of Bogotá and has also been screened at many other festivals and in cultural centres and universities.

She has also worked as unit production manager and editor for the documentary, EDIFICIO ESPAÑA (2014), nominated
for the Goya Awards in 2015, and as co-producer and co-scriptwriter for The Hidden City (2018), both directed by Víctor Moreno. At once, she is a former programmer for Ciclo Docma at Matadero Madrid and has also lectured at the Master in Documentary Film
at the LENS School of Visual Arts in Madrid.