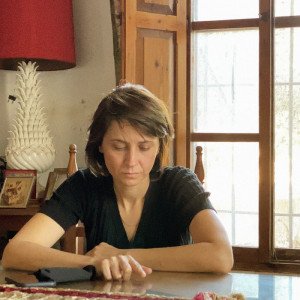 Director, editor, and scriptwriter born in Benidorm (Spain) in 1982. She has a degree in Audiovisual Communication and a postgraduate degree in creation from Elias Querejeta Zine Eskola.

In 2009 she founded the collective lacasinegra with Elena López Riera, Gabriel Azorín, and Carlos Pardo Ros, with which she develops different projects that relate film with contemporary forms of audiovisual production and dissemination. Together with the collective, she co-directs and edits PAS À GENÈVE (lacasinegra, 2013).

In 2018 she directed and edited her first solo feature film, <3 (2018, DOK Leipzig), winner of the DELUXE Award at the Seville Film Festival.

She is currently developing her new feature film project, EL CIELO EN LA TIERRA. The project was one of those selected for the Spanish Film Academy residencies.

As editor and scriptwriter, in 2016 she worked, among others, on the films LA SANGRE ES BLANCA by Óscar Vincentelli, awarded at FID Marseille (France) or H by Carlos Pardo Ros, premiered at Visions du Réel.

She has also worked as a tutor for documentary projects at the Madrid Film School (ECAM).