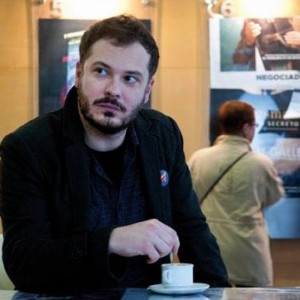 Enric Pardo has a degree in ESCAC at 2001, specializing in screenplay. He Co-wrote the feature films TRASH by Carles Torras and ANIMALS by Marçal Forés. Also worked as a screenwriter and script coordinator for the animated series for adults ARRÒS COVAT. He teaches screenwriting, playwriting, fiction series and nonfiction programs for ESCAC and has been head of the Screenplay Department. Actually, he directs the postgraduate studies of Screenplay for Television Fiction in ESCAC, the postgraduate of Humor and Entertainment for IDEC and El Terrat; and is the head of Television Fiction department in ESCAC. He has written the novels “Todas las chicas besan con los ojos cerrados", TODAS LAS CHICAS BESAN CON LOS OJOS CERRADOS (All the girls kissing with eyes closed), (Random House Mondadori), soon adapted to film, and PRIMERA TEMPORADA. In 2010 begins to work on the production company "El Terrat" as a writer in the Fiction Department, developing and creating drama series, miniseries and TV movies. "2037" is his first short film as writer and director.