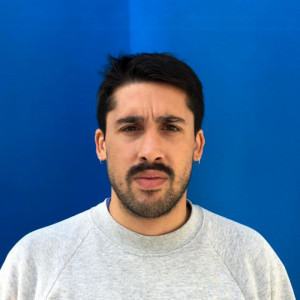 Born in Murcia in 1991, Carlos Saiz began filming his family trips and a series of short films alongside his friends at the age of fifteen. After living in London for a period of time in which he experimented with different approaches related to cinematographic art, Saiz came back to his native city to shoot the music video ISLAMABAD, a song by Los Planetas, which enabled him to obtain a scholarship to study a Master's Degree in Directing and Filmmaking at the EFTI School. There, Saiz shot his first short film as the master's final project: LA HOGUERA (The Bonfire), which has been selected at very important festivals such as the Festival Internacional de Cine de San Sebastián, the Clermont-Ferrand International Short Film Festival, and the Molodist Kyiv Film Festival from Ukraine.